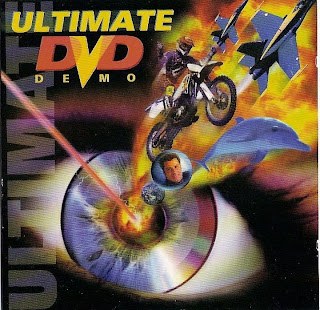 Where does a person start to describe this masterpiece? All senses clamor to express gratitude for such a marvel of human innovation. It is the perfect culmination of design, emotion, and reckless literalism the sound industry has ever witnessed. Disregard for a moment the disc within, which serves as a comical relic of a time when DVD's still stood to stun the masses with their wild clarity and audio. Focus instead on this cover. Truly, a more perfect collage of things has never been arranged in our lifetime. We can only start in earnest to parse the majesty of this image. Regardless, in the interest of understanding true beauty, start we must.

We will begin with what typically comprises the main focus of any image containing an eyeball: the eyeball itself. This genderless orb, its retina a desperate sea of blue, commands the gaze of all who gaze upon its gaze. This eye must have been selected from the most compelling of Clip Art packages, perhaps one not even commercially available. Lo, this is not ordinary eye, used for such base practices as looking or peeking. This is the unblinking portal to our very souls.

As such, it makes sense that the next Photoshop layer would be a ferocious and unwavering red laser shooting out of it. Where is this laser pointing? To whose very core is it mercilessly plummeting? Is it an act of vengeance towards the taunting letter "A" in the word ULTIMATE, the M being but a innocent casualty in this ageless rivalry? Or is it intended instead as a warning to all of us; a foreboding reminder of our own mortality? It is the latter.

But to regard the laser as the terminus of this image would be to overlook the bounty that is literally rocketing forth from the rest of the retina. Indeed, if one can brave the initial consuming heat of the flame burst, seemingly borne of a mistreated pupil, we are instantly overcome by a cacophony of swirling emotions that leave us simultaneously dizzy with hope and thirsty for comprehension. A human form propels forth on a dirt bike, riding (or perhaps escaping) on this wave of fire, in search of redemption he may never find. Below him, a dolphin leaps downward, hopefully towards an element less fire-based. Do the fighter planes, long a symbol of man's obsession with his own manifest destiny, ironically signal a move towards global harmony? Why is the motorcycle man twice as big as the tiny jet by his handlebars when they exist on the same plane? Perhaps this is a coy commentary on perception by the artist. It is not ours to confirm, only to bask in the abundant and semi-professionally cropped context clues.

One thing remains unshakably certain, however. The true conjurer of this epic dreamscape is John Travolta. Placed in front of and noticeably larger than the entire planet Earth, the omen his constipated grin reveals is one that will forever confound even the most devoted scholars. Within his shrunken, meaty head lies the answers to this puzzling melange of metaphors. Should anyone in their lifetime ever solve the conflagrant riddles layered in this master work, we shall all feel the paradigm shift loudly and permanently beneath our feet.